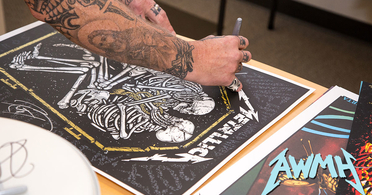 May 3 Update: New items available to bid on now! http://talli.ca/AWMH-eBay

A little over a year ago we proudly launched our foundation, All Within My Hands. We thought it would be awesome to go on this journey together, so starting today we’ll be posting monthly eBay auctions with all proceeds benefiting the foundation. Each auction will include a new experience or unique item for you to bid on – some big, some small, some quirky and unusual and some collectable. 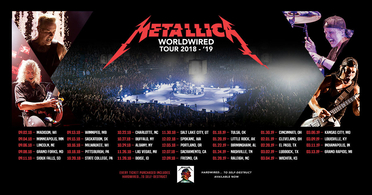 North America, Round Two!
May 19 Update: Philly! We’re coming back to celebrate WMMR’s 50th birthday with you on October 25th at the Wells Fargo Center!
see more 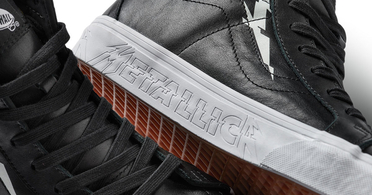 Teaming Up With Vans Again!

We're psyched to announce that we have once again teamed up with our friends at Vans to bring you two new styles in the Vans x Metallica exclusive collection of footwear, apparel and accessories. The latest installment from the long-time partnership marks the third collaboration between us and the iconic Southern California company. 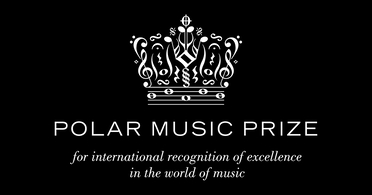 Honored With The Polar Music Prize

We are thrilled to announce that on June 14th we will receive one of the most unique and distinctive honors in music, Sweden's Polar Music Prize. In a ceremony broadcast live on Swedish national television we, along with our fellow laureate Afghanistan National Institute of Music (ANIM) and Dr. Ahmad Sarmast, will be extremely proud to accept the award from His Majesty King Carl XVI Gustaf of Sweden. 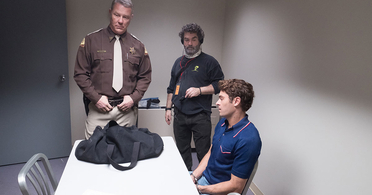 No rest for the wicked here as James spent a few of his days between tour dates in front of the camera once again for Academy-award nominated director Joe Berlinger as he filmed scenes for Joe's upcoming film Extremely Wicked, Shockingly Evil, and Vile. The movie follows the relationship between notorious serial killer Ted Bundy, played by Zac Efron, and his longtime girlfriend, played by Lily Collins, who at the time, had no knowledge of the crimes. 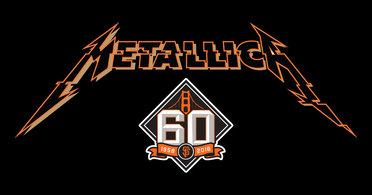 That's right... Metallica Night number six is on the calendar! On April 23, 2018 we'll take a quick break from the European tour to head back to the Bay Area and celebrate one of our favorite hometown traditions, Metallica Night at AT&T Park with the San Francisco Giants. Members of the band will be on hand to start things off right with the National Anthem and first pitch, sticking around all night to cheer on the team against the Washington Nationals. 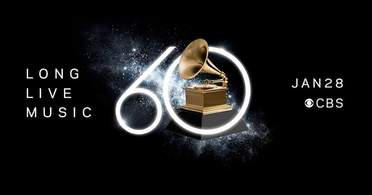 We are once again extremely honored and humbled to announce that we have been nominated for two Grammy Awards. Just over a year following its release, Hardwired…To Self-Destruct has been nominated in the Best Rock Album category and “Atlas, Rise!” has received a nom for Best Rock Song. 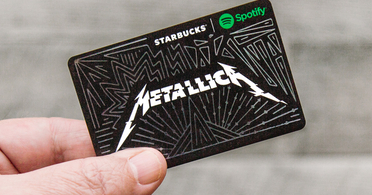 All Within My Hands Teams Up With Starbucks and Spotify

As we celebrate the launch of our new website for our All Within My Hands foundation today, we’re also excited to announce that in the spirit of the holidays and their “Give Good” campaign Starbucks and Spotify are donating $1 million to be divided between our foundation, Chance the Rapper’s Social Works and Lady Gaga’s Born This Way Foundation. To commemorate the partnership, starting tomorrow (Tuesday, November 28th) limited edition gift cards featuring each artist will be available at 8,000 Starbucks stores throughout the U.S. while supplies last. 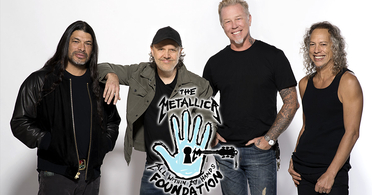 In February of 2017, we announced the formation of our All Within My Hands foundation, dedicated to assisting and enriching the lives of members of the communities who have supported the band for years, as well as encourage participation from fans and friends. We’re excited to take the next step in giving back and today have launched an all-new website, allwithinmyhands.org, to let you know what we’ve been up to, keep you posted on new activities, and provide you with a place to read up on the causes we support and ways you can assist. 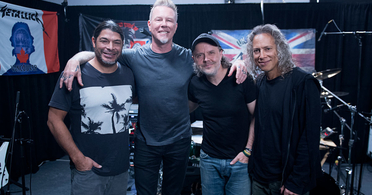 Get all the behind the scenes tales from the creation of Master of Puppets along with Robert’s thoughts on the album and playing those songs live. Be sure to tune in to It’s Electric! the next two weekends, Sunday, November 12th and 19th at 3:00 PM PT and check out video from the recording of the show airing on YouTube this Monday at 9:00 AM PT. 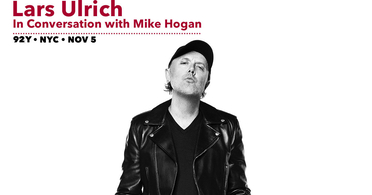 Lars In Conversation At The 92Y In New York

Join Lars as he takes the stage at 92nd Street Y (92Y) in New York City for a career spanning conversation with Vanity Fair’s Mike Hogan on Sunday, November 5th. Covering ground from his youth on the tennis courts to life on the road today, catch all the behind the scenes stories... nothing is off limits! 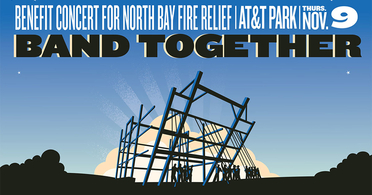 11/6 Update: The Band Together Bay Area concert will be streamed live on YouTube, Facebook and Twitter this Thursday, November 9th kicking off at 5:45 PM PST. Head over here to Metallica.com, our YouTube channel or Facebook page to watch the five-hour event... we’ll be up last for a 75-minute set after G-Eazy, Rancid, Dave Matthews, Dead & Company and Raphael Saadiq. The show will also be available to Twitter's logged-in and logged-out audience in the U.S. via @tippingpoint and also here. Contribute to fire relief during the live stream by clicking the “donate” button on the stream or texting “TOGETHER” to 20222. 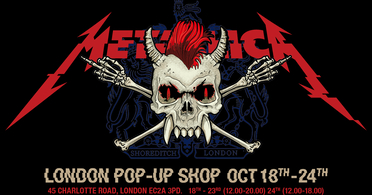 The Metallica Pop-Up Shop Returns, Next Up: London

We’re gearing up for the second leg of the European WorldWired Tour and we’re excited to return with our new indoor show, kicking things off in London.  And in the grand tradition that started a little over a year ago in Minneapolis and carried on into Copenhagen and North America in 2017, the pop-up shops are well, popping up again!  We’ll be setting up stores in a few tour cities so that you can grab your WorldWired gear in advance and check out some cool new, exclusive and collectible items. 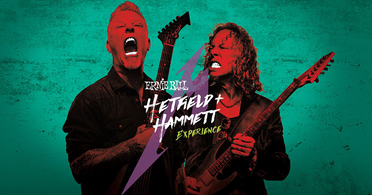 Hang with James and Kirk at HQ!

What do James and Kirk do when they’re not on tour?  Hang out at HQ!  And now you have the chance to hang with them!  In conjunction with our friends at Ernie Ball, makers of fine guitar strings and instrument accessories, three lucky winners will be coming to the San Francisco Bay Area to spend the day with James and Kirk at HQ AND get their choice of a Hetfield or Hammett Signature ESP Guitar. 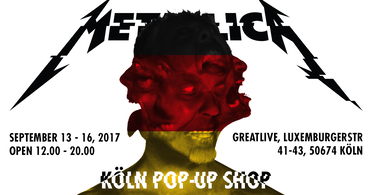 We’re back... and so are the pop-up stores!  We are so excited to return to the road and bring our brand new indoor show to arenas all over Europe.  And in the grand tradition that started a little over a year ago in Minneapolis and carried on into Copenhagen and North America in 2017, the pop-up shops are well, popping up again!  We’ll be setting up stores in a few tour cities so that you can grab your WorldWired gear in advance and check out some cool new, exclusive and collectible items. 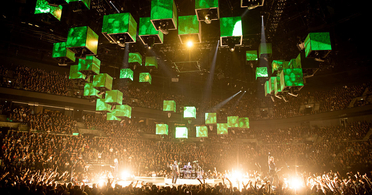 IN WITH THE NEW

One thing I am absolutely sure of in the aftermath of the opening night of leg one of Metallica’s European WorldWired tour…there wasn’t one single Dane (or any other nationality for that matter) inside of Royal Arena who was unhappy they had to come back to see this make-up show from February’s cancellation! At the time, it likely felt like the worst thing in the world – an egregious act which could never quite be recovered even after the band assured all they would kick things off in Copenhagen for all ticket holders. But not anymore. Because this was the night Metallica unveiled a completely new, never-seen-before approach to enjoying their music live, bringing into the hard rock arena the sort of lighting and video you’d associate with enormous theatrical productions. 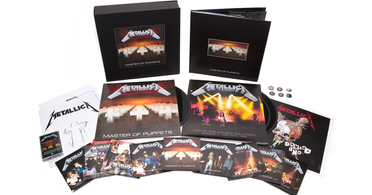 A little over a year ago, we proudly reissued our first two albums remastered for the most advanced sound quality possible along with special deluxe editions including previously unreleased audio and video recordings.  We promised to give that love to the entire catalog, and we’re back today with all the details about the release of Master of Puppets, coming to your favorite music retailer and Metallica.com on November 10th. 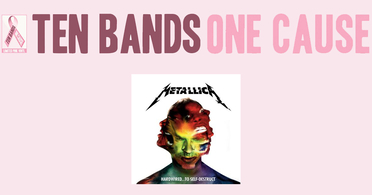 UPDATE: METALLICA.COM PRE-ORDER IS SOLD OUT Check with your local retailer for their availability.

Hardwired…To Self-Destruct will be issued on pink vinyl on September 29th as we are proud to be a part of the Ten Bands One Cause campaign to raise funds and awareness for Gilda’s Club NYC.  Founded in 1995 in memory of Gilda Radner, the comedian and original cast member of Saturday Night Live who passed away in 1989 from ovarian cancer, the non-profit provides support and education while also fostering empowerment to cancer patients and their families in New York City.