The Lords of Summer Return in Lisbon for the Worldwired European Summer (…Vacation??? Errr, no, not really, it’s hard stuff) 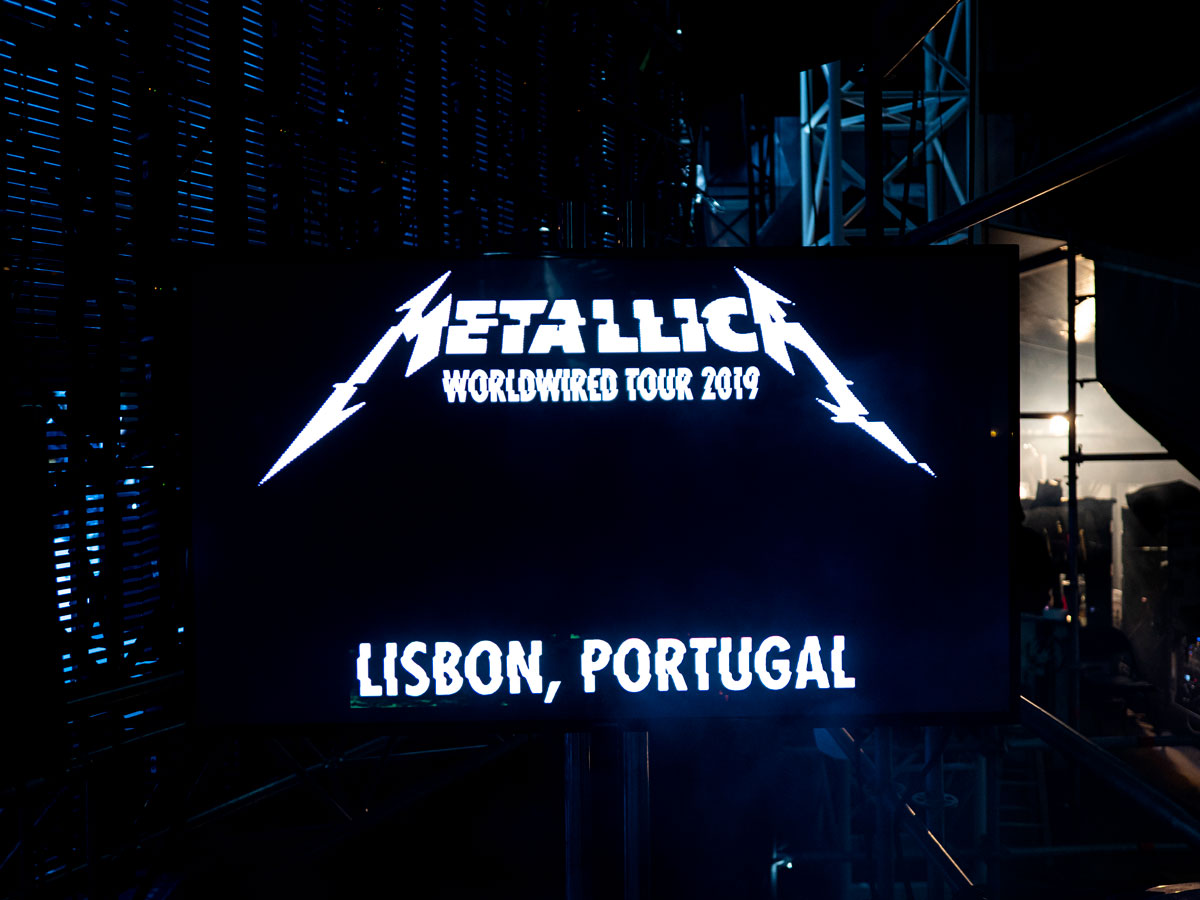 The relative “tea-break” of that lovely, convenient little arena stage which has been rolling around the world for the past year-plus is officially over for a while.

We are back to the front, back to huge stages and hot summers in Europe.

Yes ladies and gentlemen, boys and girls, it is stadium time again, which means Lars, James, Rob and Kirk are actively re-entering the very physical endeavor of the WorldWired mileage zone as they prepare to cover vast tracts of their enormous stage. Now, given that such re-entry is something you cannot really train for, the only way to get up to speed with it is to take a deep breath and simply get on with the job of cardio-training and delivering the goods. It cannot be easy, yet as we approached the European return on a windy Wednesday night in Lisbon, spirits were good and plans made back in the San Francisco Bay Area were ready to be executed, most notably that the setlist was going to be refreshed.

European audiences have always loved their support acts, and so it was a return to WorldWired for not one but two opening slots. Bokassa, the Norwegian stoner rockers who made a huge impression on Mr. Ulrich, bring their stony vibe and energy to kick the night off, before Ghost appear. Led by the charismatic genius that is Tobias Forge, Ghost bring their serious production to the WorldWired party as one of the world’s hottest rock bands, with awards, accolades, and an ever-increasing fan base gleefully subscribing to the supremely crafted melodic revelry, delivered with those now famous theatrical elements. 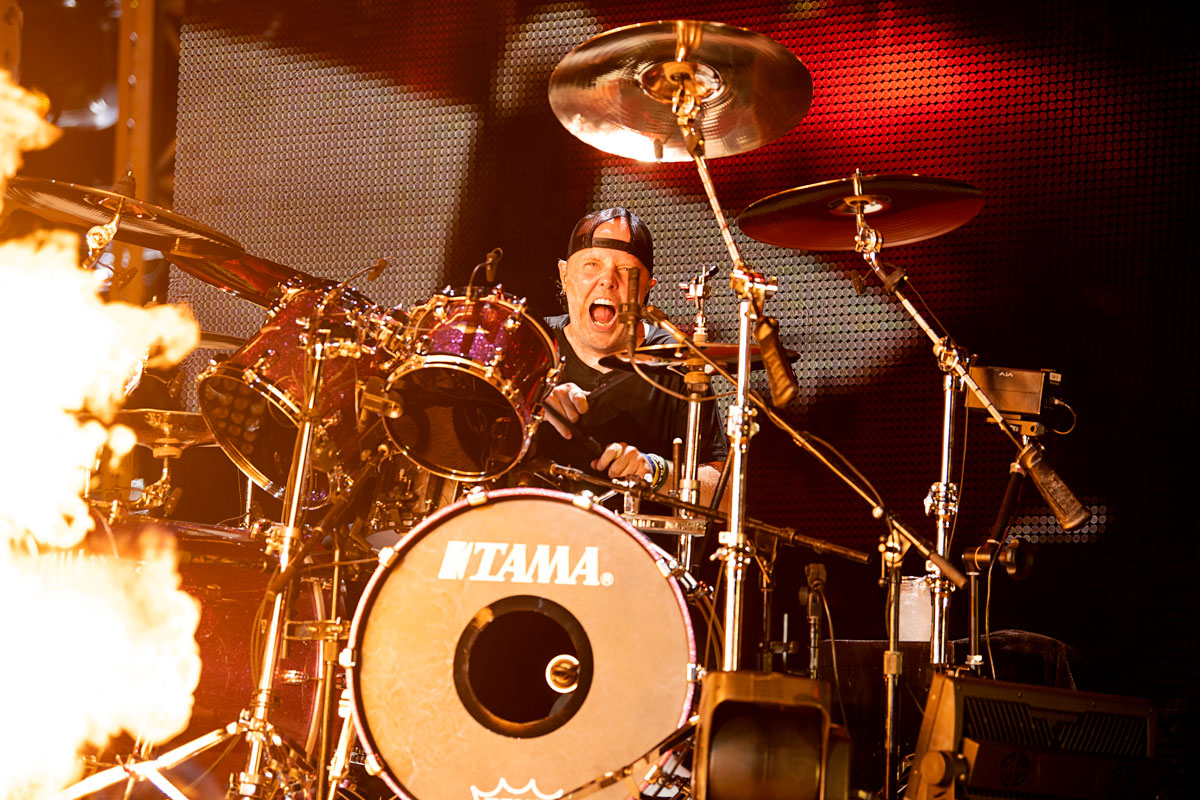 One thing to remember about Metallica in the last couple of years is that, due to not all being in the Bay Area anymore, the early dates of any tour are liable to produce a cocktail of uncertainty as the live saddle gets warmed up again. With the previous two nights spent rehearsing and running through some specific areas of the set, it was the Tuning Room which saw the final moments of preparation. Despite having had the better part of five weeks off, it doesn’t take long for the sarcasm and laughs to roll.

“We want ‘Angry Kirk’ like when we broke into your house with Scott Ian,” giggles Lars after one new set addition run through, and a little later on, our congenial Danish host remarks that, “It’s the new, slow Metallica!” which gets an instant response from James, “It’s the new, solid, confident Metallica.”

“Not everybody!” smiles James.

“Just me then!!!” laughs Lars. “Does anyone have anything else to go over? No?... God help us all!” he giggles mischievously, and here we are, about to start the 2019 WorldWired outdoor stadium European Summer Vacation. What none of us could’ve anticipated was how fucking hard Metallica were determined to kick their own asses physically from the kick-off.

With Clint Eastwood having filled the screens and Morricone having filled the ears, “Hardwired” kicks things off, before the first surprise of the evening arrives in the shape of “Disposable Heroes” in the old “Atlas” spot. It is a cracking blast from the old days, an absolute bastard of a tune with regard to tempo shifts and gear changes, but what must the toll be on their bodies off the back of that banger of an intro? Selfishly, I love it. Objectively, I marvel at their stamina off the bat. Welcome back to the working world indeed Lars, James, Kirk and Rob. Having brutally dragged themselves from spring training into opening day, Metallica then decide that “Ride The Lightning” is a “breather,” and if the Estádio do Restelo isn’t already buzzing at the change-ups of this start, “The God That Failed” gets dusted off and proudly unfurled for a gasping audience. This opening quartet, plus the large stage and time off, have all conspired to leave the band catching their collective breath. Usually, muscle-memory allows the performing body time to re-enter the fray, but when you switch it up to deliver an opening which feels like the heart of a special deep cut set, that is not a luxury you’re afforded. It is, on reflection, a thoroughly “fuck you super deep” punk-like start to a stadium show, the sort of intro that young guns throw down in packed, sweaty clubs. You think they couldn’t? They just did!

“Unforgiven,” a savage “Revenge,” “Moth Into Flame,” and “Sad But True” give the band back their legs and perhaps offer a more settled meter for them to click into. Next on my setlist is “Fade…” but James’ tech Chad takes a tumble* leaving the stage, enduring considerable pain and doing some damage to his shoulder. As the crew rallies around, both helping Chad into a stable place and getting James a guitar (Justin, Kirk’s tech, steps in with a Het-strapped Hammett axe to the rescue), there is a quick switch to “Sanitarium.” Despite the chaos, everyone takes Lars’ pre-gig “embrace” comment to heart and “Sanitarium” is both epic and establishes that the band have fully found their sea-legs. Their stride and energy appear in sync, and their bodies seem fired back into stadium-shape. 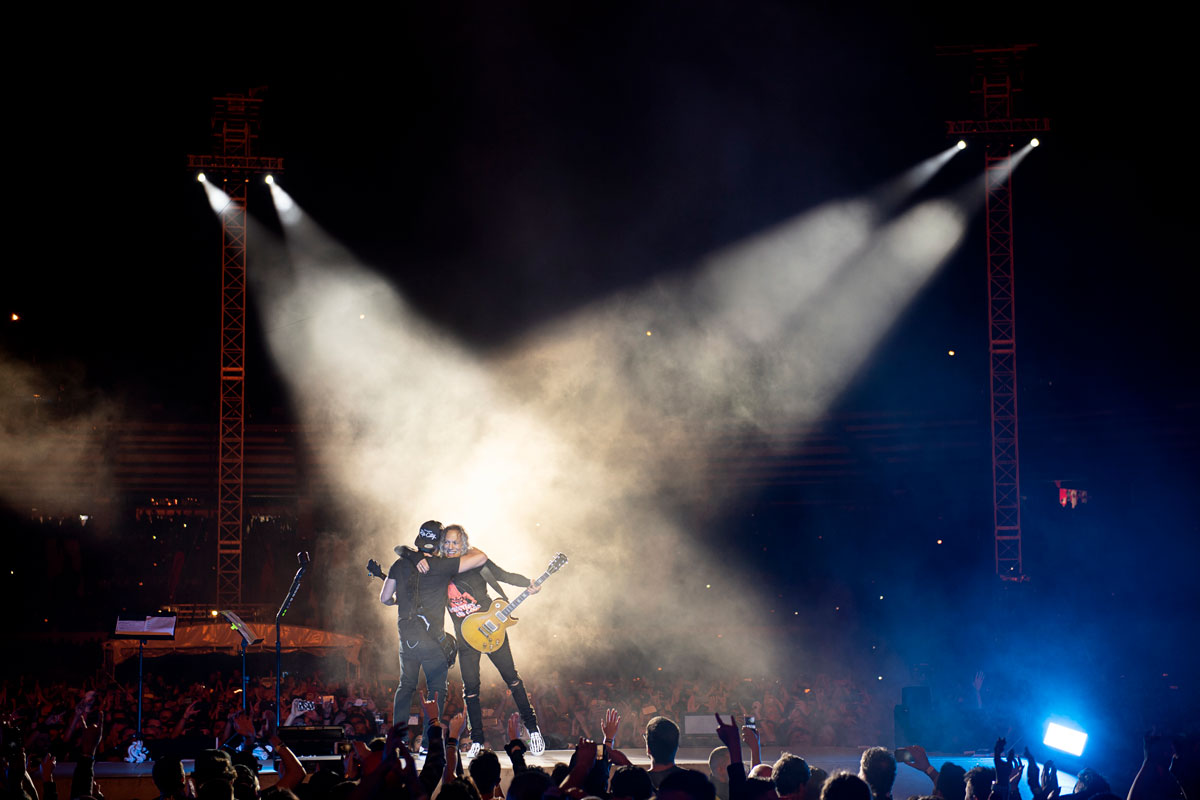 Rob and Kirk’s jam-spot in Europe will be a rip-roarer for sure as European audiences love to sing along, and tonight they are treated to a blend of punky Portuguese tributes. First up is “Censurados” by local heroes Censurados who lost guitarist and singer João Ribas in 2014, before the crowd goes choral to “A Minha Casinha” by Portuguese legends Xutos & Pontapés, whose founding member and guitarist Ze Pedro is also sadly no longer with us. And after RT’s revamped bass solo, “Frantic” flies forth and kicks 50,000 people in the face with its raw, jagged and merciless steel-toe boots. It is special to see this song revived, and having passed the 16-year-old barrier, it can file itself away as a shot of “classic” ’Tallica. I personally hope there’s more St. Anger material to come, and it would appear the fans agree.

The stadium is jumping, things are feeling most agreeable, and it is particularly good to see “One” with proper, tangible flames erupting as the “bombs drop.” Is it too old school to suggest there should always be large, rude flames during this iconographic song? No. It isn’t. There should be. “Master of Puppets” leads us to the tip of the ramp and the mini-stage, where the guys stick around for three European favorites in the shape of “Bellz,” “Creeping Death,” and “Seek & Destroy” (now returned to its more traditional spot). It is at this moment I also notice that James in particular seems to have inhaled some dragon’s blood, because he is suddenly roaring louder, looking looser and generally more Hetfieldian, those familiar expressions and crowd engagements firmly at the fore. He has said several times in the past that he loves those dips in the ramp, as they allow him close access to the fans, and perhaps it is their energy which has doubled up his own. 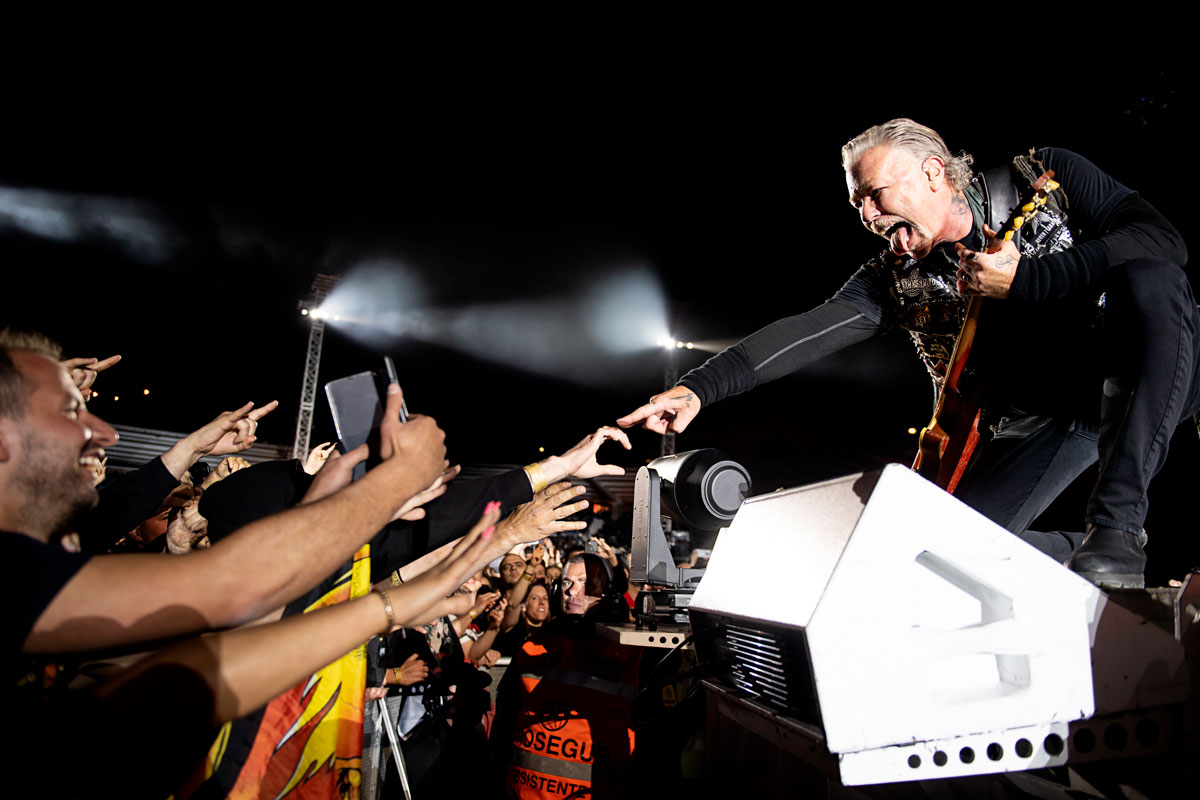 “Lords of Summer” takes the first encore spot, and how far has this song come? A smooth, stealthy gallop, it is entirely conceivable that “LOS” becomes a Metallica classic as opposed to a cool deep-cut such is the spit and polish it has received over the years. The show closes off with “Nothing” and a firework-powered “Sandman” finale which has the stadium bouncing and roaring.

With a meaty, beaty bastard of a gig thrown down like the heaviest of gauntlets, a band fast-finding their stadium gig legs after a challenging start, some technical difficulties to deal with (screen issues which can happen when restarting), plus one of the more adventurous and physically demanding setlists I can think of in recent Metallica memory, this summer is shaping up to be both fun and oozing Euro curveballs ’Tallica style.

*Chad, being the star trooper and “proper geezer” he is, soldiered on through the gig after some work from the band physical therapist, Bobby. As “Sandman” concluded, he immediately went to the hospital where matters were stabilized. He’s doing well and will be fine. The man deserves a massive shout-out from you all.