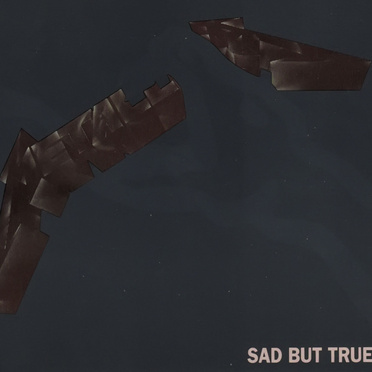 SAD BUT TRUE
Producer: Bob Rock with Hetfield & Ulrich
Engineer: Randy Staub
Recorded at One on One, Los Angeles, CA from October 1990 to June of 1991

SO WHAT
Roughly produced by Bob Rock with Hetfield & Ulrich
Engineer: Randy Staub

"One guitar, one voice... This is how Jaymz originally intended the song to be (sans the chorus and brass band - aka the L.S.O.) - so much for first impressions!!!"

Note: SAD BUT TRUE (LIVE) was incorrectly labeled on vinyl & CD as being recorded live at A Day on the Green in Oakland, CA. The recording was actually from the 1991 Moscow Show.

"This is taken from the second show back after Jaymz' barbeque party in Montreal, and is the "vinyl" (?!) debut of Metallica as a five-piece - featuring Jaymz' somewhat permanent guitar stand-by, and the scapegoat for everybody's mistakes, John Marshall.

"This is the 5th installment of demo versions we/you wish you had never heard... and guess what? We're all out of clever/stupid liner notes. N.B! Same credits as all the previous crap... i.e. Jaymz - rhythm guitar, "vocals," and guitar "solo." Lars - drums. Kirk & Jason - day off!!!"

All songs © Creeping Death Music (ASCAP) except SO WHAT © Link Music Ltd.
© 1993 Metallica