This was the ninth time that Metallica played in Munich, Germany

SHOW NOTES
The band first played in Munich on January 23, 1987 at Deutsches Museum.

Metallica last performed in Munich on May 31, 2015 at Olympic Stadium.

This was the first time in nearly nine years that “The Wait” was performed.  The Killing Joke cover was last performed on November 9, 2009 in Grand Rapids, MI

This was the first time that “Hardwired,” “Atlas, Rise!,” “Holier Than Thou,” “Now That We’re Dead,” “Confusion,” “Halo On Fire,” “The Wait,” “Moth Into Flame” and “Spit Out the Bone” were performed in Munich. 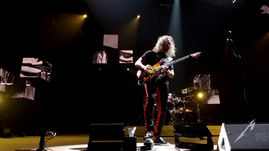