SHOW NOTES
For the second show of our short European summer tour, we found ourselves at the Rockavaria Festival in Munich, Germany. This was the eighth time that we’ve played in Munich. Our first gig here was on January 23, 1987 during the Damage, Inc. tour and our last visit was on May 6, 2009 during the World Magnetic tour.

We played five songs that had never been performed in Munich before and quite a few that hadn’t been played here in over ten years.

“Fuel” opened the show. It’s only the third time we’ve played “Fuel” in the opening slot and the song was last performed in Munich nearly 11 years ago on June 13, 2004. This was only the second time that “Fuel” was played in Munich.

After considering a couple different options for slot three, we decided to give “Metal Militia” another shot. This was the first time that the song was played in Munich and only the eleventh time that it’s been performed since 2004.

“King Nothing” was played in Munich for the first time in nearly 19 years. It’s only performance here was on October 26, 1996 during the Poor Touring Me tour.

“Cyanide” was performed in Munich during our last visit on May 6, 2009 and “Lords of Summer” was played here for the first time.

“Sad But True” is a staple in the Munich setlists as it has been performed here at every show in the city since 1991 but it was followed by “The Frayed Ends of Sanity” which, like “The Unforgiven II,” has only been performed three times since its release.

We switched things up in the Post-“Puppetz” slot, this time going with “Fight Fire with Fire.” It was the first time that “Fight” was performed in Munich in 28 years! It’s only performance here was on January 23, 1987. It’s also the first time the song has been played in over year – its last performance was on March 20, 2014 in Lima, Peru.

We swapped “Fade to Black” out for “Welcome Home (Sanitarium).” Despite regular performance over the years, this is the first time in over 22 years that “Sanitarium” was played in Munich. It was last played here on November 22, 1992 during the mammoth tour behind The Black Album.

“Seek and Destroy” closed out the main set again and the encore remained the same as it was in Gelsenkirchen. “Creeping Death” was performed for the seventh time in Munich, “Nothing Else Matters” for the fourth time and “Enter Sandman” for the fifth. 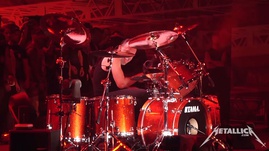 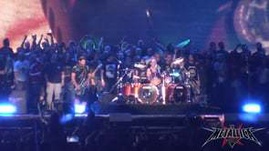