SHOW NOTES
This was the 117th show on the World Magnetic Tour and the 91st performance in 2009.

This was the 12th time that Metallica played Sacramento.

Metallica last played in Sacramento on March 10, 2004 at Arco Arena during the Madly in Anger With the World Tour. You can download a copy of that show here.

Metallica first played Sacramento on December 29, 1985 at the Memorial Auditorium.

This was the seventh time that Creeping Death was played since this leg of the North American tour began on September 14, 2009.

This was the third time that Fuel was played on this leg of the North American tour. It was last played on November 3, 2009 in Ottawa.

This was the first time in 11 years that Fight Fire With Fire was performed in Sacramento and the third time the song was played since 1985. It was last performed in Sacto on September 1, 1998.

This was only the ninth time that Metallica covered Budgie’s Breadfan in 2009. 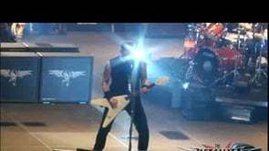