OTHER ACTS
Down, The Sword

The last time Metallica performed in Houston was on November 16, 2004, 2004 at the Toyota Center on the Madly in Anger With the World tour.

Metallica has played Houston on the following tours: Ride the Lightning, Damage, Inc., Van Halen’s Monsters of Rock, Damaged Justice, Wherever We May Roam, Guns ‘N Metallica, Summer Shit, Poor Touring Me, Poor Re-Touring Me, Summer Sanitarium 2003, and Madly in Anger With the World.

This was the first time that Fade to Black was performed on the World Magnetic tour.

This was the first time in 11 years that Motorbreath was performed in Houston. It was last performed here on April 28, 1997 at The Summit. 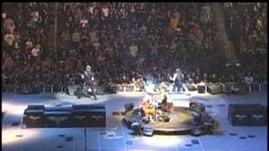