Madly In Anger With The World

The Olympic Stadium was the home of the 1972 Olympic Games. Tonight’s show also represented the largest venue Metallica has performed at in Munich as a headliner.

This is the first time The Memory Remains has been played in Europe since November, 1999 in Berlin, during the S&M Tour.

This is the first time Damage Inc. has been played in Europe on this leg of the Madly In Anger With The World Tour.

This was the second time Dyers Eve was ever played in Europe.

The last time Metallica performed in Munich, was on October 26, 1996 at the Olympia Halle.

At the end of the show not only did the four band members thank the crowd, but they were joined by Lars’ son Myles, who wanted to be a part of the show too! 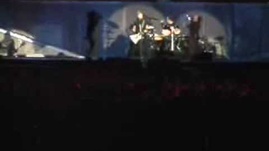